Back in the early part of 2018 I booked a trip with Yorkshire Coast Nature (www.yorkshirecoastnature.co.uk) to experience diving Gannets from a boat off Bempton Cliffs. About the same time of booking my Mam had a fall and broke her hip and so this has meant I have not been out with the camera anywhere near as much as I would have liked since the accident in February as we have had to look after Mam until she got back to some form of normality.

Aug 13th was the date booked and so a long weekend just outside of Scarborough was booked at a campsite for a few days with my wife. Steve Race runs the photography elements of the great work YCN do and Steve kindly offered to pick me up as he headed down from his home to Bridlington to meet the other people on the trip.

It was a misty but dry morning, the thunder storms that had threatened in earlier weather reports were not going to take place and so the trip was going ahead. We boarded ‘Yorkshire Lass II’ skippered by Paul Chapman.

We set sail on a calm, windless but misty morning after a brief on safety and what we would be aiming to do during the 4 hours or so on the sea from Paul and Steve. The bait for the Gannets was in place on the boat, this should keep them going for a while, I think the fish is Mackerel. 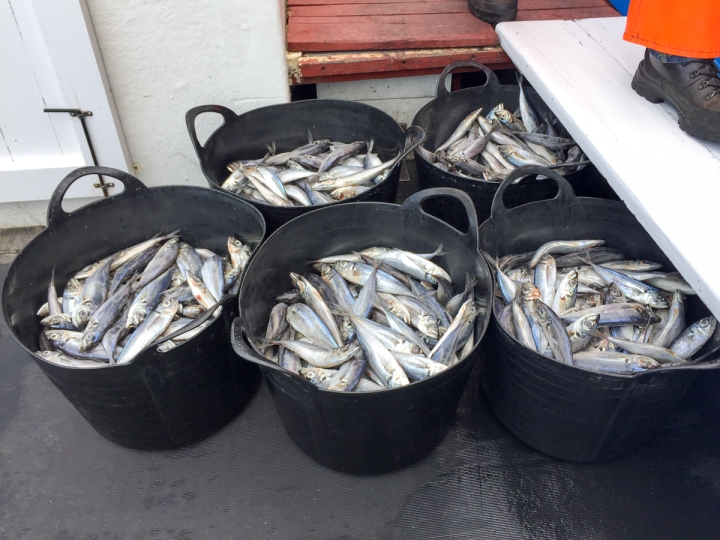 As we headed from Bridlington to the baiting area odd birds were seen, Cormorants and Terns positioned as you might expect on floating bouys. This one below is a confusing one, Common or Arctic? I felt at first glimpse Arctic but to be honest an not 100% sure and it quite possibly a Common? 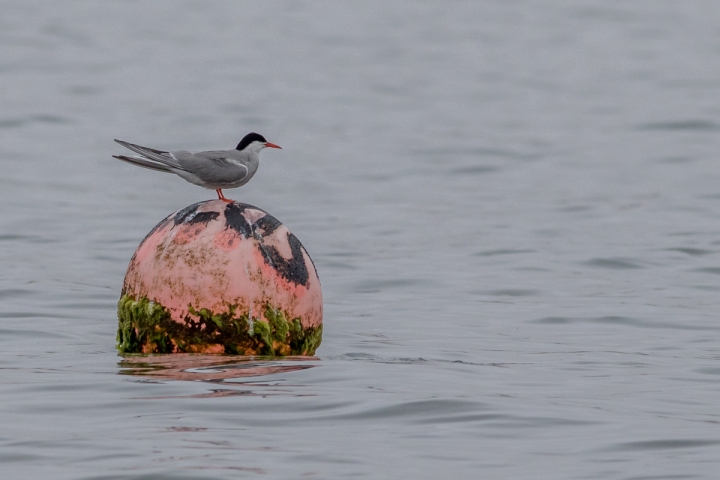 Very soon we had the first Gannets flying near and above us, Fulmars were also appearing too.

I saw a dark bird in the distance, got a couple of images in the mist, and it was not until later in the day when checking images on my camera I realised it was a lifer for me a Great Skua (Bonxie), nice one! We had two sightings of Bonxie on the outbound trip and one inbound. 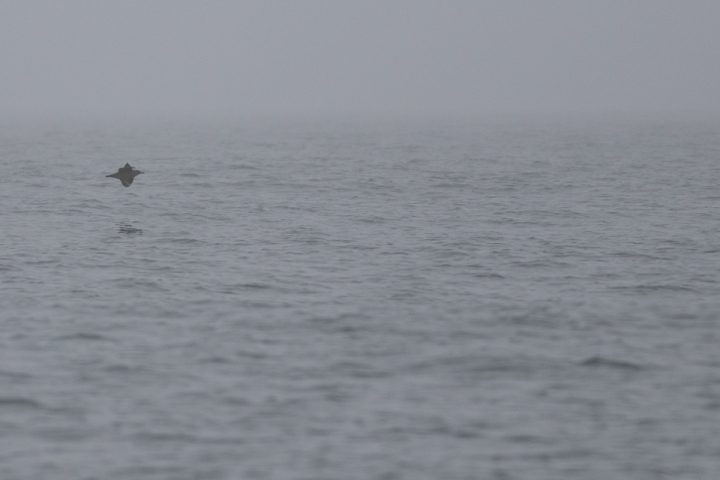 Soon after I spotted the first of a couple of sightings on the day of Harbour Porpoise, we also later on in the day saw a seal pup show its head briefly.

Then just before we had reached the Gannet area another bird in the distance caught my eye and was photographed and this turned out to be another lifer a Manx Shearwater (Manxie) – brilliant!

There were a few quite moments as you can see by the fellow in the burgandy coloured fleece just relaxing! 🙂 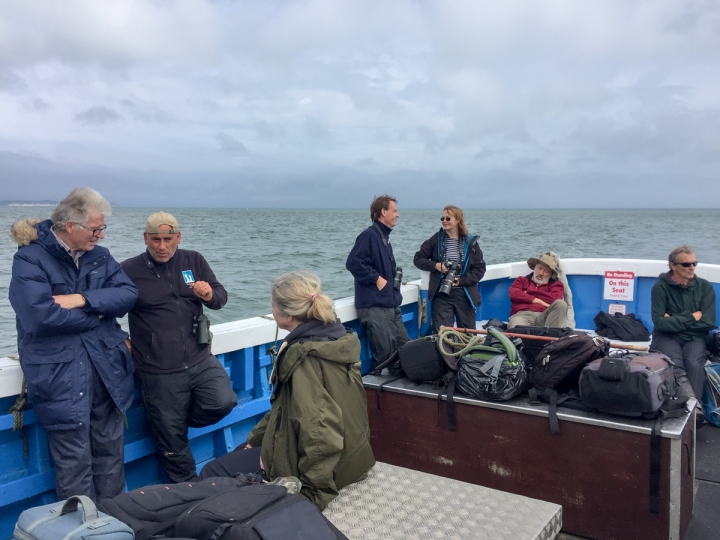 Soon we were at the ‘chumming grounds’ and the Gannets started to gather in the mist as well as the odd Fulmar. 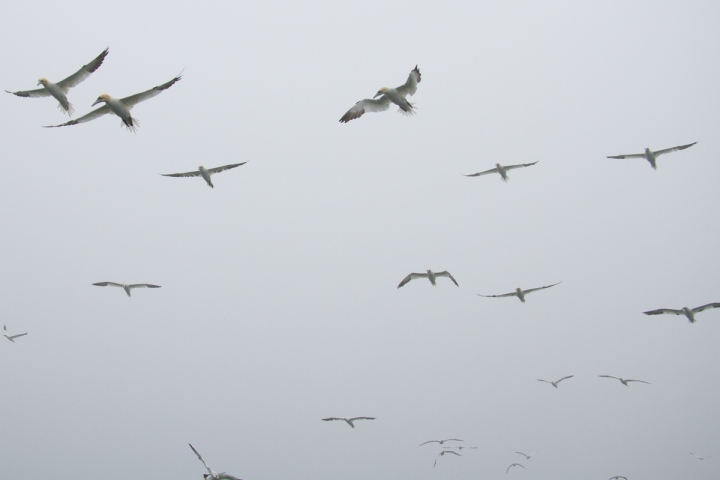 Paul the skipper began slowly throwing in the bait and away we went. The sea was very calm but still rolling a little and the motion when looking thought the camera to try to take photographs did make me feel a little queasy to be totally honest so following Steve’s good advice the spectacle of watching the birds diving at 50 to 60 miles per hour for a fish was enjoyed with my eyes only and this helped in managing the feeling of seasickness.

I had in mind certain images I wanted to try to get and took two camera bodies and two different lenses to help me achieve this, one goal was obviously images like the ones above and also I wanted to try to get the moment a Gannet touched the water as it was diving for fish, below two of the better images showing this moment.

The noise Gannets make is always surprising especially when they are in groups but to see and hear them hover as best the could in the gentle breeze, open their beaks gulping in air to aid protection of their brains and necks for the high speed dive to follow was amazing to witness so close.

As the fish ran out the Gannets began to gather on the water giving opportunities for shots of these birds I had not managed previously.

Fulmars was always in the vicinity too trying to pick u on any snaps that may be left over by the Gannets and as the time to depart for Bridlington got closer we had up to 12 Fulmar around the boat as the Gannets left us, the Fulmars were so close at times you could have touched them, marvellous! 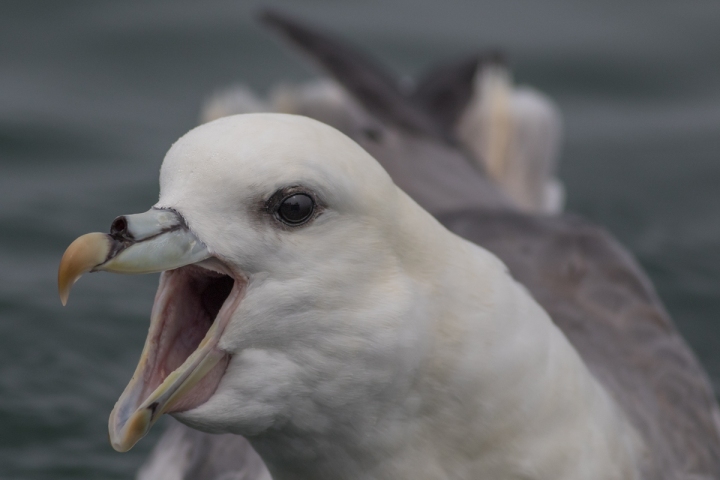 Gulls were also around us – no surprise there eh? Herring and Great Black Backed did their best to get a feed too. 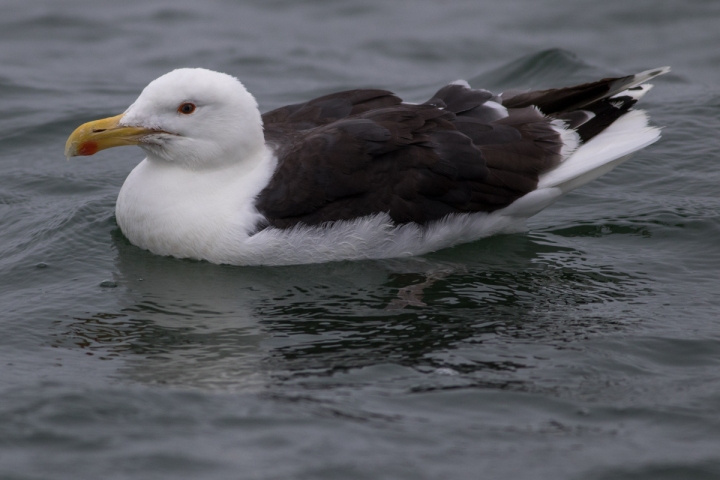 Close to Bridlington harbour we briefly had good views of Sandwich Terns and I managed a couple of images of a juvenile as it fished near the harbour mouth.

All in all a great trip by Steve & YCN, Steve is really nice lad that does his best to assist all as much as he can to ensure a good day is had, his YCN partner Richard is of the same ilk also.

So I highly recommend visiting the YCN website for information on their trips and workshops where all skill levels are catered for. I for one will be seeing what I can fit in with them next year. Don’t forget to got to the Yorkshire Coast Nature website at  – www.yorkshirecoastnature.co.uk