The use of the last day’s annual leave on a Friday tied in with my wife working over the weekend plus a weekend weather outlook that looked really good worked out well for a 3-day tour of Lincolnshire in my motorhome.

Overnight stays were booked in Skegness and Caistor and the first port of call on the Friday morning was Frampton Marsh. Arriving at the car park decent numbers of Redwing and Fieldfare were seen immediately plus the usual greeting in the trees of a group of 20 plus Goldfinch.

Not many birds were in the air at my time of arrival with only the odd flypast being seen like this Lapwing.

A trio of Mute Swan were spotted doing a large loop of the reserve while walking to the 360 hide where good groups of Linnets and more Goldfinch were seen.

From the hide several Skylark were playing hide and seek from the 360 hide as I looked towards the East Hide.

Some Canada Geese had a couple of Barnacle Geese among them. This group of birds were pretty active both in feeding and flying around this area of the reserve, seemingly doing a bit of a fly then feed then fly routine for a while.

Looking around other directions from the 360 hide not much was around apart from small numbers of the usual duck species and the odd wader, mainly Redshanks.  Meadow Pipits fought with Skylarks for the best feeding spots, Linnets could not settle at all going from one section of reserve to another to another and Pied Wagtails too seemed a bit flighty. I could not see any raptor action to cause this activity. 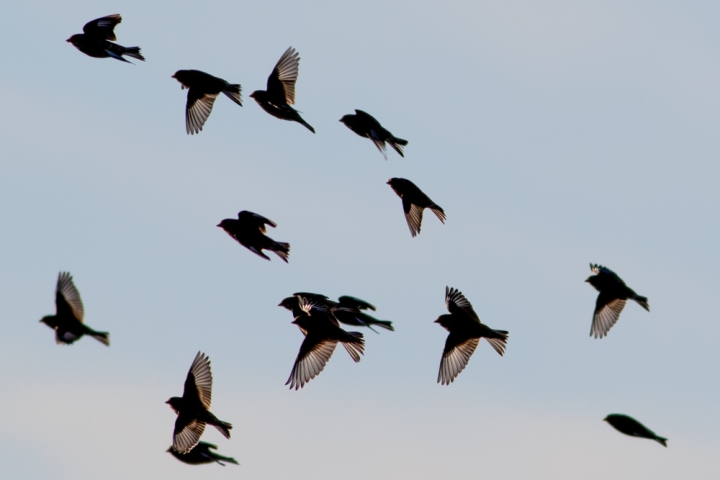 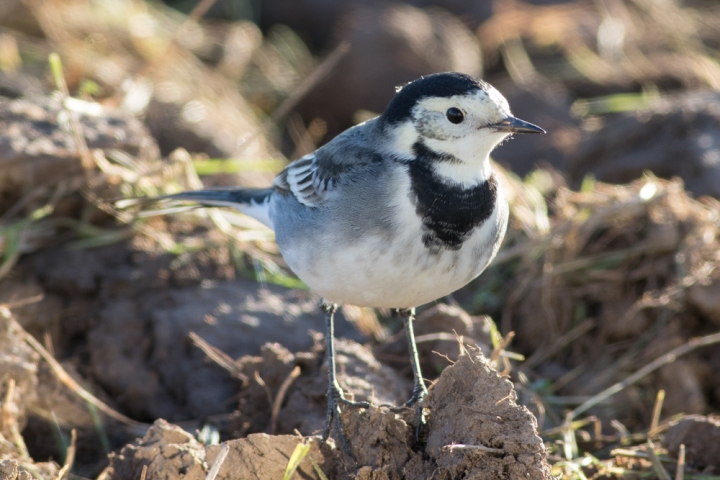 In the distance when leaving the 360 a large number of Brent Geese passed heading inland. 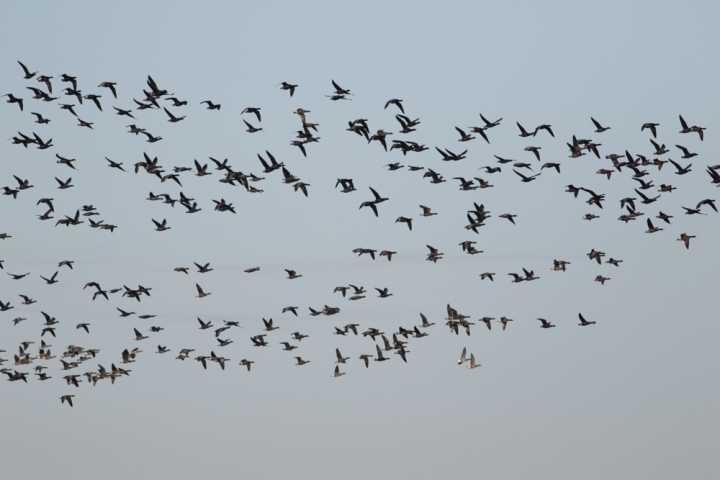 Opposite the reed bed hide some Wigeon landed alongside a decent number of Brent Geese already on the water opposite, here too a pair of Goldeneye were observed.

I walked round the back of the reed beds heading back to the reserve visitor centre and soon got onto a distant female Stonechat. I stood and waited and the bird slowly worked its way from the hedgerow bordering the reserve and the ploughed farm fields over the track towards the reeds themselves to be lost to sight.

A cup of coffee was in order when back at the visitor centre, here Wigeon passed close by and Tree Sparrows were about but most were refusing to perch in the sunlight. Now suitably refreshed off for another walk this timer towards the bank and marsh area.

I saw what I thought was a Merlin perched low in the fields on a distant post, closer inspection of the images taken confirmed the species, a Kestrel. More individual Redshanks were about in the water and the air, the Redshank seen below in the air has a closed ring on.

Nothing of note was seen from the bank over the marshes so I headed back to the car park.

Walking back 3 Ruff were seen in with a small gathering of Lapwing.

When near the gate to take you towards the hides the skies then became full of easily 1,000 Golden Plover, a wonderful sight.

I had been told that more Stonechat had been seen around this area and decided to sit on the bench a while and after about 5 minutes a cracking male bird appeared atop a post.

He was soon to be followed by a lovely female and also a female Reed Bunting. The chats moved swiftly down the track towards the 360 and reed bed hides looking for food as they went. 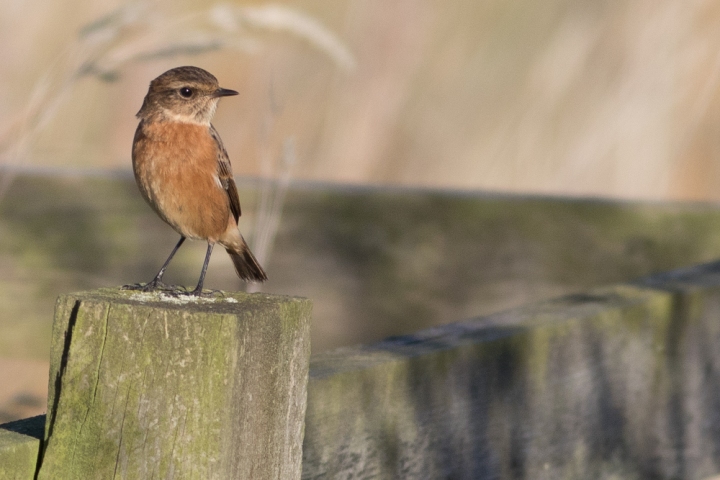 I called it a day here and headed off for a couple of hours at Freiston Shore. As is usual when l get to the car park House Sparrows greeted me by posing nicely in the late low sun on top of the hedgerow. A Robin welcomed me when entering the reserve hide.

It was generally quite here with Wigeon being in the ascendency number wise both on the scrape but also the neighbouring fields with them clearly being heard calling. Brent Geese dropped in occasionally.

Only birds of interest after scanning the scrape were a lone Curlew and Grey Plover, Redshank and Little Grebe were feeding in close to the hide in the shadows and reducing sunlight. 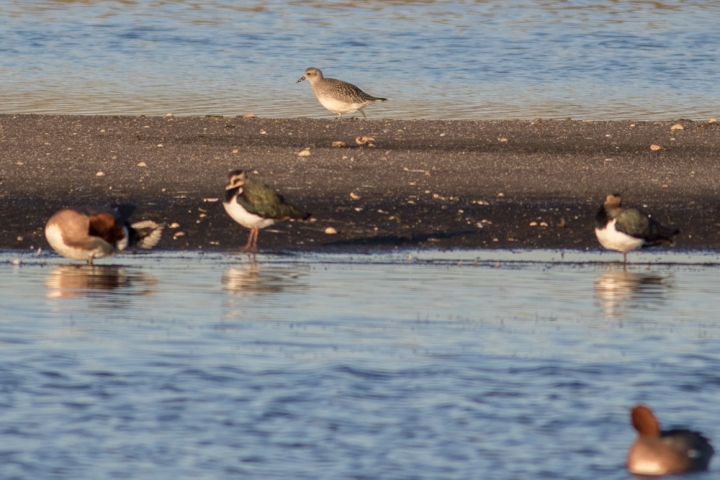 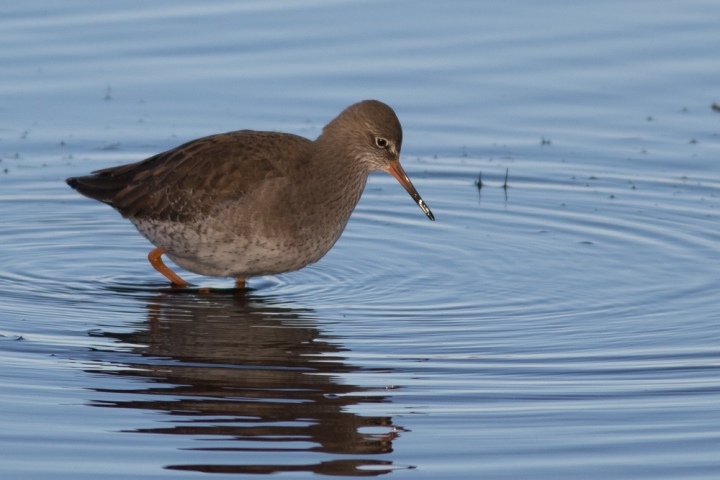 I then headed onto the stop over for night 1, had a good day and wondered what day 2 would bring at Gibraltar Point and Theddlethorpe?