Had a free day on Sunday 14th May with my wife going out all day shopping – decided not to join her on this occasion!

I needed to take the motorhome out for a run and so thought why not combine the two and so with the weather being ok on the east coast of lincolnshire off to Gibraltar Point I headed.

This is a place I do not go to very often so I felt that it would be a good day out for that reason alone. Upon arrival at the main car park a Cuckoo was loudly calling in the Plantation (Sanctuary area), had a good scan with my bins but sadly no sighting at this point.

I decided to walk northwards along the west dunes track for a while to see if the still calling Cuckoo could be seen, I heard a second bird call in response to the first but both were not to be seen. I then headed towards the wash viewpoint and here as I made my way to Lill’s Hut heard several Whitethroat singing their distinctive song loud and clear.

Walking around this area I saw Meadow Pipits, Reed Buntings and Skylarks and heard the loud call of Oystercatcher nearby, a few minutes was spent scanning for anything in the area but all in all not a lot to be seen, walking back good views again of Whitethroat and Pied Wagtail were seen then a bird dropped into a grassy area to my left, a Wheatear, nice!

I got a few quick pics to record the bird as seen and after a little while re-traced the bird after it flew off towards the Old Saltmarsh and using a bush to hide my presence I got close enough to get a decent image even if it was partially against the sunlight.

I then began to make my way past the new (to me) visitor centre onto South Marsh Road, not much to be seen along here apart from more Skylark, Reed Buntings and Meadow Pipits. 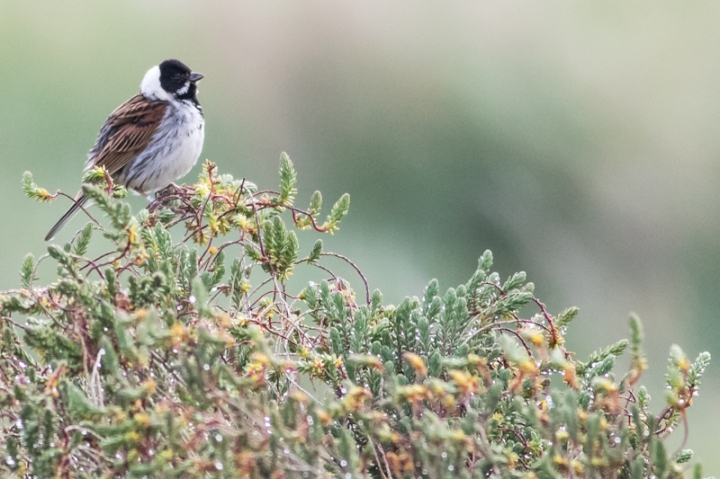 I walked past the viewpoint onto the beach to see what was about but hardly any birds at all to be seen as the tide was ebbing, a few Herring Gulls adults and young birds were seen plus a small group of Cormorants flying low over the waves north to south.

Again scanning before me surprisingly to me brought little bird wise apart from more Skylark and Meadow Pipits.

The area of beach below had one bird on it thats all! A Ringed Plover was looking rather sad all on its on as it moved slowly around for food on the small sand bank in the centre of the photo. 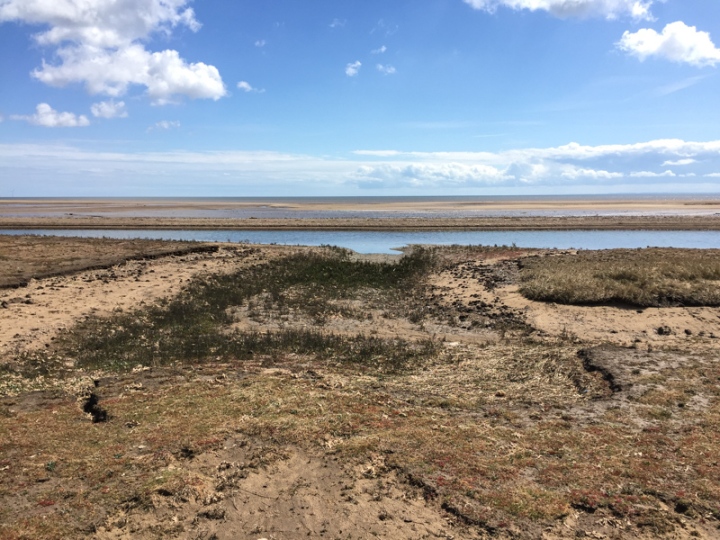 I then moved away from the beach to Mill Hill viewpoint to scan around to see if anything new could be seen.

More Whitethroats and Linnets were main birds seen flitting around the vegetation here. 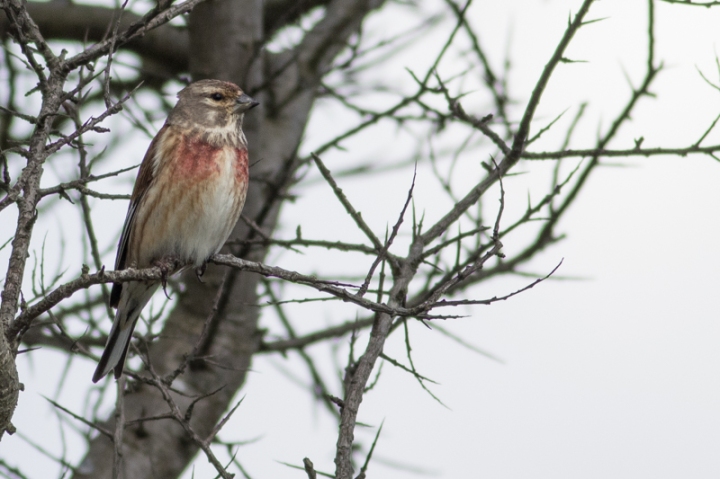 I ended up at the Mere Hide for a sit down and a sarnie, not a lot on the water here, distant Black Headed Gulls, Little Grebe, a Mute Swan family with one signet enjoying a ride on the back of a parent while its siblings swam near the other.

A family of Coot were relaxing to the left go the hide at the edge of the water with the half a dozen fledglings learning how to go about their daily business when a Little Egret glided low over the family causing much consternation among the Coot family.

The Egret settled on the opposite side of the Mere and began hunting for food in their usual sneaky style!

Next place to visit was the Tennyson’s Sands hide and here a few more birds were seen with the best being over 20 Avocet seen all over the area in front of the hide.

Next place to visit was the Tennyson’s Sands hide and here a few more birds were seen with the best being over 20 Avocet seen all over the area in front of the hide. I then walked to the Plantation (Sanctuary area) hearing Cuckoo calls getting louder all the time but still with no sightings at all, it helped that most birders walking in the opposite direction were telling me they had good views of Cuckoo in this area – not! I saw Song Thrush gathering food for young I am assuming looking at the amount of worms etc. it had in its beak. Also usual woodland birds like Wren, Robin, Great, Blue Tit and a few Goldfinch that were feeding their young in  the trees. 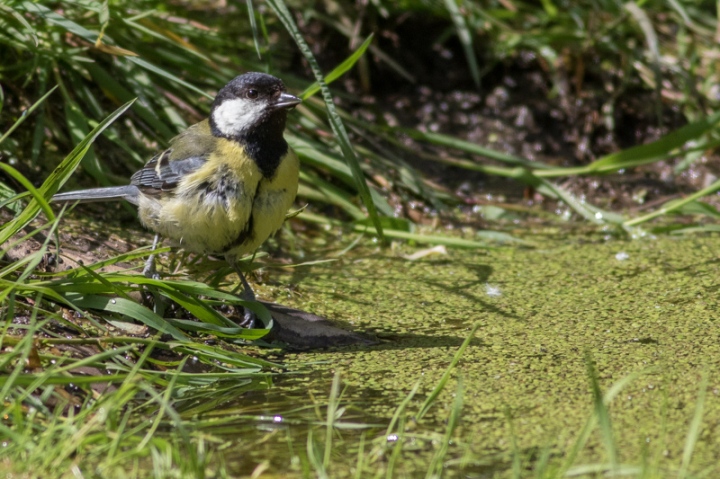 Then finally a 4/5 second view of a Cuckoo as it glided from one tree to another – as soon as it disappeared from view and landed it began calling ‘Cuckoo’ ‘Cuckoo’ but could I find it? NOPE! Well at least a sighting was achieved.

​​​​​​​I had a total of 5 hours on site and thought after a half hour in the motorhome with me boots off I still had time to visit somewhere else and the next stop was on the way home Frampton Marsh.

I usually start in the 360 hide here and saw good numbers of Brent Geese both in the air and on the water.

One of the small islands in front of the 360 hide towards the direction of the East hide there were nesting Black Headed Gulls, one pair of Avocet and a single pair of Ringed Plover too. 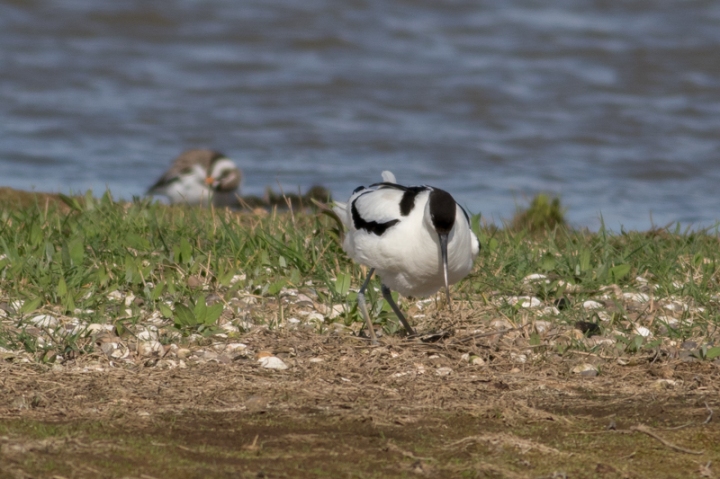 Time was running out and so I decided to walk past the reedbed hide around the track back to the visitor centre hoping I would see or hear the reported Grasshopper Warbler seen north of the reedbed. Sadly no Gropper but a lone Corn Bunting banged out its trill song as a consolation.

A Lesser Black Backed Gull battled the fairly strong winds giving my the chance to get a photo.

In the reeds adjacent to the picnic area at the visitor centre a male Pheasant popped his head up from nowhere an looked rather shocked as I took his picture.

Then in the same area a Canada Goose then did the same thing as if to say ‘don’t forget me!’

I then made my way home after a good day out on our wonderful east coast of lincolnshire I saw just over 60 species so was happy with that with the stars being the Cuckoo and Wheatear.