After thrashing my local patch for a few weeks and feeling better following a bout of man flu, it was high time I made a visit to the Wash. It was a decent morning, weather-wise and the lagoon looked well adorned with birds on my arrival. The water level was well up, not surprising after all the rain we’ve had. At least 25 goldeneye were spread across the lagoon, mostly paired up, some displaying, drakes looking absolutely splendid. In fact virtually all the wildfowl were now in stonking breeding plumage. Pintail, wigeon, teal, gadwall, shoveler, mallard and tufted duck all looked very happy with life. Associating with the tufties were four scaup, all female/first winter types.

Amongst the waders on show were a flock of around eighty black-tailed godwits feeding in the wet grassy areas and a group of nine avocets were back on site. A pair of oystercatchers were mating. A snipe sunned itself.

A few gulls loafed on the islands including one with yellow legs. I initially thought it a yellow-legged gull but it didn’t look quite right, more herring gull looking in most respects, so probably a yellow legged variant or hybrid. 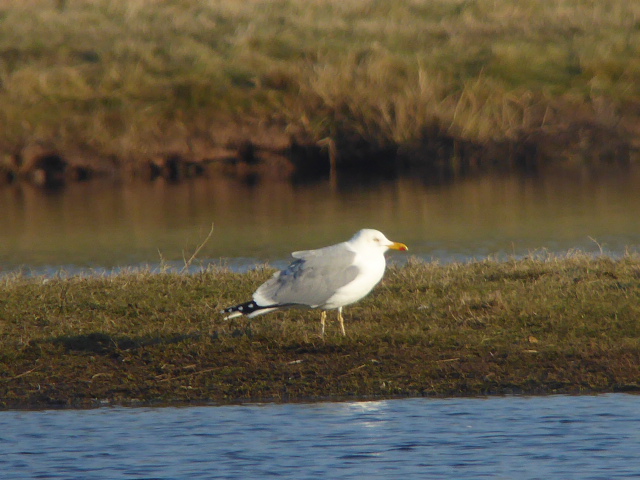 The wet grassland walk provided lots more birds, hundreds of wigeon fed. Skylarks sang, tree sparrows chirped, a short-eared owl put in a fly-by, as did a buzzard, which then sat on the sea wall. In fact it was shaping up to be pretty good for raptors, with sparrowhawk, kestrel, peregrine, hen harrier and merlin all bagged by the end of the day. A stonechat was in the usual wild set aside area, towards the prison.

A coffee break preceded a good walk to the Witham mouth. A big pork pie and a banana went with me. I just can’t seem to resist the hike out there, love the solitude, big skies and wide open space, not to mention the many birds to see. There wasn’t much on the sea, apart from a few great-crested grebes, a drake eider and two pairs of red breasted mergansers. Brent geese were coming and going, a pale-bellied bird mingled with the more regular dark-bellied ones. Lots of waders were still over-wintering, with curlews, redshanks, bar-tailed godwits, dunlin, knot, turnstones lapwings and golden plovers.

It was as I was leaving the cut end hide when the hen harrier came into view, a fine male, the first one I’ve seen this year. The merlin was expected, they very often perch on the posts out in the saltmarsh and sure enough, one showed well as I made the trip back to the car park. Finished up with 75 species in the notebook and a memorable day.