My wife and I had our first excursion in our motorhome this summer over 4 days (3 nights) staying at Woodthorpe Hall Leisure Park about 6 miles inland from Mablethorpe. We got there late Friday afternoon and soon were directed to our pitch which was ideally located with it being next to the end for a small natural copse close to the golf driving range on the site. 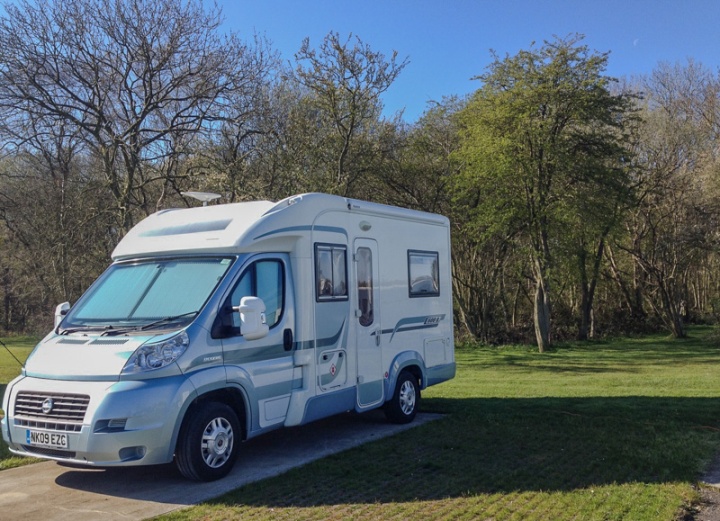 Now the rest of Friday was a rather blowy and wet affair where nothing of any sense would be outside in the changeable ‘4 seasons in 1 day’ type of weather we were experiencing. Saturday morning though was bright and soon once we awoke a Blackcap could be heard banging out its lovely song from the trees close to our motorhome.

As the sausages and bacon were being expertly cooked by my wife I sneaked off into the copse with my camera to see what could be seen. Chiffchaff was also heard loud and clear close to our motorhome and soon sightings of both species were seen.

I also found during my wanderings a couple of what I believe to be hatched Pheasant eggs. Great Spotted Woodpecker was both seen flitting around the trees and also drumming loudly in the distance.

After brekkie we ventured into Mablethorpe for a saunter, we did our ‘usual’; walked into town towards the sea on one side of the road, then walked along the front for a while then walked back on the other side of the road hence being able to enjoy all the local amenities and shops oh and maybe a pub too!

The seafront walk was bereft of seabirds apart from the 7 Gulls counted, we did a short sea watch while having a cup of cappuccino, but nothing was about apart from 3 Feral Pigeons on the beach. Walking further on we came to a boating lake and walked around this to see what was about. On 1 of the boating lake islands we saw at least 3 pairs of nesting Canadian Geese, loads of Mallards, a trio of Tufted Duck pairs plus the odd Moorhen and good numbers of both Starling and House Sparrow were all around the grassy areas, the last 2 species all looked to be either gathering nesting materials or worms etc. for currently hatched young.

I also saw 2 Pied Wagtails that looked like a pair to me correct me if I am wrong, it would be nice if the second pic below is a White Wag!

Back at base camp I saw my first Swift of this summer belt past riding the strong gusty wind and also glanced 2 Swallows near the main building so went to see what was what here and they we working making a nest under a canopy with a sign in it – the nest was being built on top of a security type light used to illuminate the camp sign.

When walking about I found a Robin’s nest with chicks in that could be easily seen from the roadside, hope it is not to obvious and that the babies make it.

Another walk into the copse near our pitch gave me quick views of 2 Great Spotted Woodpecker and also a Treecreeper. Blue, Great and Long Tailed Tits were busy around the edge of the copse at all times of the days. Plenty of Goldfinch, Chaffinch but only a couple of Greenfinches were seen throughout the weekends now the campsite. I also saw a Chiffchaff low down in the copse vegetation holding a large white feather so looked like these birds were going down here, nice!

The small fishing lakes on site had Moorhens only visible when I walked past them but on the golf course a family of Greylag Geese, the pair had at least 10 that I could count.

My cousin’s daughter who was with her Mum in a static caravan on another part of the site came to visit us and when I walked her back to her caravan at about 10pm, this area was one I had not seen and had another wooded area and here 2 maybe 3 Tawny Owls were calling loudly in response to each other’s calls.

On our way home we stopped off at Sutton on Sea for a walk about and lunch in the van, this time I saw about 12 Sanderlings dotted about the less populated beach, the 2 birds I was focusing on went up in the air quickly to join the other 10 birds that flew along the coastline from the south and headed north towards Trusthorpe. From what I saw most of the Sanderlings were displaying differing levels of breeding plumage.

More House Sparrows and Starlings were seen along with 2 House Martins that were battling the high winds over the centre of Sutton on Sea.

This trip was not a specific birding trip but turned out to be interesting with a low level of effort to see some nice birds.

One thought on “Lincs Coast for few days”