Today with the weather being decent I went off for a walk along the River Witham in my home town, this river runs through 2 local parks, Queen Elizabeth II & Wyndham. I am about a 6 minute walk from my home to get to one end of the QEII park and then begin to walk following the river towards the centre. You have opportunities to peel away from the riverside and head into several small wooded and overgrown areas that can hold different birds.

My main aim today was to see if the Kingfishers could be seen and maybe photographed and also to see what newly arrived Warblers could be seen around the park, its always a good spot to see and hear Chiffchaff, Blackcap and sometimes Willow Warblers.

​The Kingfisher hunt did not materialise into anything but when I was on the riverbank talking to a lady about her love of and sightings of the local KF’s I heard a Chiffchaff calling loudly. So when we split up to go our different ways I moved to a large hedgerow away from the river and soon got onto the Chiffchaff, lovely looking bird in the sun and it sounded even better as it belted out its “Chiff” “Chaff”  distinctive song. 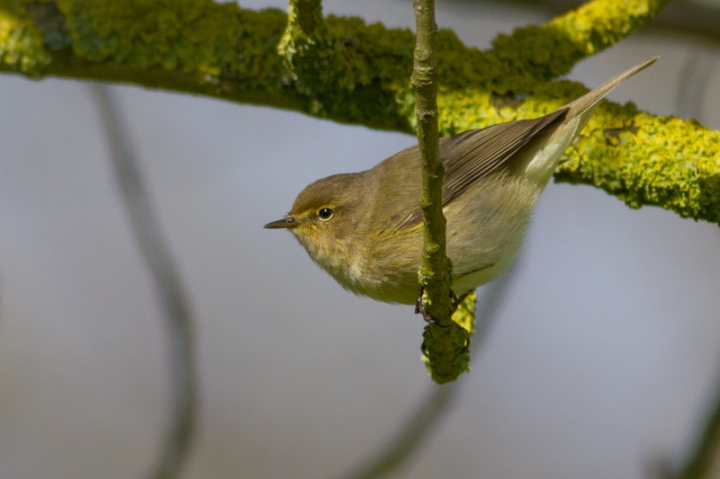 I had about 10 minutes watching the active bird flitting about in the trees and low shrubs in the area it had apparently claimed. I walked off once again heading towards town following the hedgerow / tree line away from the riverbank and within 5 minutes I heard another Chiffchaff song being delivered into the air! A couple of minutes later I got onto the bird and once again the bird was making a claim for the space with it singing its clear song for all to hear.

Walking around the park the most common sound heard loud and clear was that of the abundant Robin, as you would expect it was seen during all stages of my wanderings today, easily a dozen different birds seen if not more.

I briefly saw with my naked eye what at first thought was a Wood Pigeon but upon a look through my bino’s it was not 1 but 3 Stock Doves, I have been getting Stock Doves in my back garden for some time now so wonder if these are the same birds? These birds flew off so back to the riverbank walk I went and then I saw a lone Stock Dove on the riverbank ahead of me, I got a couple of clicks on my camera before a loose dog scared the bird away!

I crossed the road bridge that takes you into Wyndham park and the next 45 or so minutes I walked along the river I only saw common species you would expect to see in cultivated park land. I turned around at a point near Grantham College and was surprised to see a low flying Buzzard, I managed the photo below, not the best it was against the light.

Walking back I saw a pair of nesting Moorhens and watched smiling to myself as the male attended to his sitting female by bringing her nesting material to finish the nest off around her.

I got to the locally known ‘White Bridge’ in Wyndham park I heard then saw a Grey Wagtail, this bird was a male that was singing his head off when he landed, I tried to get a photo but I was behind an elderly gentleman who was not the fastest walker and his path took him straight to the spot I would have gone to try to take a photo of the Wagtail, never mind great to see, it flew off over the model boat lake and disappeared. When doing this walk I have the same route that follows the treelike / hedgerow and once back in QEII park I soon saw another Song Thrush this time pretty close, I hid behind a tree (as best I could!) and got the shot below as it foraged.

Once again as the bird was getting closer and closer, it was gong to be close enough to be a ‘frame filler’ but sadly a loose West Highland White dog ran over from he path and off went the Song Thrush – I too just turned around and continued my walk.

I managed to see Chiffchaff number 3 on the way back home it was on the opposite side of the river to me, so not too bad on the Warbler search then 3 different and very active birds.

​Something caught my eye as odd in a wooded area just before the small fishing lake in the park. Upon closer inspection it was a dead Magpie hanging upside down with fishing line wrapped around it legs and this was also caught on a branch, the poor bird must have suffered badly before its death. 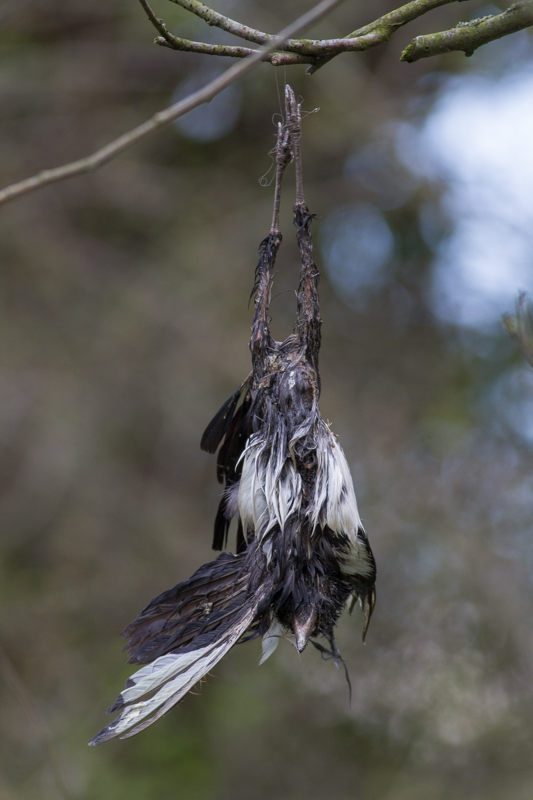 That was all of note really on my enjoyable 3 hour walk, the two parks were full of active finches all preparing to begin breeding and on the way home I saw Coal, Long Tailed, Great and Blue Tit in the lane at the end of my street as well as the usual suspects but no Goldcrest or Bullfinches this time.

2 thoughts on “Warbler Count – a walk in the park”