The day dawned cold wet and windy, we were just an owls hoot from abandoning the birding and gate crashing the geezer’s party, but decided to carry on.

The heavy drizzle came in waves, occasionally stopping. We questioned ourselves as to how bonkers we actually were. We got off to a flyer with tawny owl and a barnie. Not a great deal more here, but an albino or leucistic baby rabbit looked scary in the headlights. Black rabbits are fairly common, but I’ve never seen this before. 15 species before sun up.

This wasn’t on our original agenda, but it was a bit of a dead loss in the wood with the conditions. 3 green sandpipers fed. 4 oystercatchers probed, the juves are now almost the size of the adults and are beginning to feed for themselves. 2 little ringed plovers pecked. We got a few warblers. Sp count up to 33.

Corn buntings showed well, probably about a dozen. Our first peregrine of the day put up a flock of corvids and pigeons. We recorded peregrine at 4 different places during the day with another on St. Wulframs in Grantham in the evening. List up to 44.

Lots of birds here, with plenty of small passerines including goldcrest and treecreeper. It was fine now, the sun even popped out for a while. Best bird was a spotted flycatcher on the island in the stock pool ( furthest east lake). My first one in the Grantham area this year. Sp count 60, it wasn’t yet 9am.

We called in here hoping for red kite and raven. We didn’t get either, but we did get a brilliant stroke of luck. There were quite a few black-headed gulls heading west. I mentioned to Ben that we should check a flock for a common gull, which we still needed for our list. The trailing bird in a flock of 30 immediately caught our eye-all white with a black hood-it was only a flippin’ mediterranian gull !, my first in the Grantham area and a great bonus bird. 61.

There seemed to have been a big clear out of waders, tide was out. 2 turtle doves sat in a dead tree accompanied by a pair of little egrets. on the saltmarsh a male marsh harrier gave good views and a peregrine was perched on a post. We found a whimbrel and heard others. Best wader was a curlew sandpiper in front of east hide. Our list was up to 85.

For once Freiston had the edge on Frampton, the (smallish) 5.7m tide was now in and there were a few waders about. We saw as many whimbrels as curlews on the saltmarsh, about 30. On the shoreline a group of around 30 stunning summer plumaged bar-tailed godwits fed with a few red knots. Grey plover, turnstones, 4 brent geese, 12 eiders and a few golden plovers were also on the tide line. A constant stream of swifts headed south, along with many sand martins. A gannet went north. On the reservoir we found a fine juv. type wood sandpiper, it looked like the same bird that was there last week. A pristine  juvenile ruff was absolutely immaculate. The wood sand was our 100th bird of the day. Common gull and red-legged partridge took us to 102.

Here we added Egyptian goose, jay and lesser whitethroat. Amazingly we had gone all day without dunnock, mistle thrush or long-tailed tit. While watching a couple of green sands, Ben spotted a dunnock which popped out of the reeds and fed with the green sands, odd! Time for a quick check through the gulls in the fading light (we were fading, too), and Ben picked out what he thought could possibly be a Caspian, He’s got form, having found one at Whisby recently. It certainly looked ok from what we could get on it, but we left it as just a possible. A little owl and grey partridge were seen on the way home. We were to remain long-tailed titless.Total 108, superb.

Sketch of the day.

Spotted flycatcher, one from a while back. Coloured pencils. 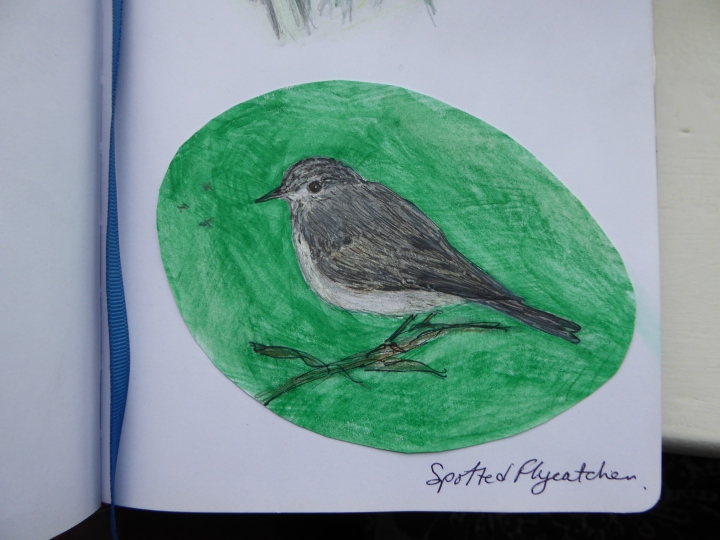 One thought on “Ton-Up”