The highlight of a good session at Marston this morning came in the form of a Jack Snipe which i really did almost trip over, it flew up from within a foot of my feet.

In true Jack Snipe style it didn’t fly too far and dropped down somewhat surprisingly in some very rough grass amongst the trees, i stalked it for a few minutes but managed to flush it a second time ! So when it landed for the second time, again below the trees I was determined not to flush it for a third time, some very stealthy stalking followed and I managed to pin it down to a small leafy hollow in the ground where it was laid out horizontally.

After some frantic calls to the Marston Massive, with Spadge connecting soon after, I attempted some iphone pics through my bins, I eventually managed to stand within about 10 feet from it.

Although Marston has always been one of the top sites in Lincs for Jack Snipe, its been many Years since one was reported let alone photographed so this is a bit of a Holy Grail here.

The above pic shows how cryptic the plumage is and what a challenge it was to relocate it amongst this habitat.

Prior to this little beauty, I had seen and heard 5 separate Chiffchaff from the works over to Frinkley Wood, with the first bird behind the works in full song, and a single bird alongside the river which was extremely yellow and bright, A Green Woodpecker was seen and heard on two occasions, at Frinkley and Mill Lane.

Three White Wagtails on the filter beds hopefully mark the start of Spring, with Tree Sparrow mating in an area that they have been absent from for many Years hopefully a sign of things to come.

A single Little Egret stood on the river bank, bringing that touch of the exotic alongside the remaining Winter Wigeon.

With no wildfowl on the reedbed pool I knew they would all be on the Scrape, so with the possibility of Garganey or dare I say it a Green Winged Teal ! I visited the hide, although neither were among the throngs , I did get 4 Canada Geese, which as the Marston regulars will know these are far from regular here these days, a welcome addition to PWC2015.

A single Green Sandpiper fed in front of the hide, presumably the over wintering bird, with half a dozen Common Snipe for company.

All in all a fabulous few hours and what patch birding is all about ! 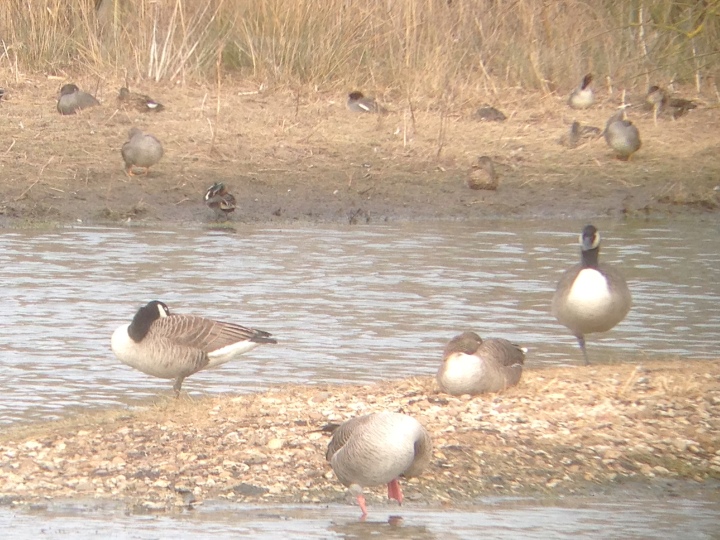 Its surprising how excited one gets about “Common ” birds whilst doing PWC2015 !