After a shaky start due to Asthma and chest infection combo I finally got to Marston at midday, a bit later than I would have liked on such a beautiful Winters morning but Hey ho !

After pulling up along the concrete road and flushing a Common Buzzard from a roadside sign, my gaze was immediately drawn to a very large Gull loafing alone on the realignment area, now large Gulls are not common here especially on the deck so this was quite exciting, as I lifted the bins it took off and flew towards me , my God it was huge , I immediately said out loud Argentatus Cool ! But it had the most extensive hood I have ever seen on a Herring Gull , very solid , and extending right down on to its breast and only very slightly blotchy , my thoughts were now considering Smicka ! but as it flew over it headed off into the bright sunshine and was lost to view, so cannot really go any further with the ID on that one ! bloody typical Marston bird !

Dave had informed me that there were plenty of lbj’s at the works end, so I had a trudge around but couldn’t find much, a few Pied Wags and Mipit were all that was around this new wasteland.

The bushes around the works were surprisingly empty, a Green Sandpiper had been flushed from its favoured pool and was rushing about around the river bank looking for a secluded spot to land, its mate was still around the lagoon. 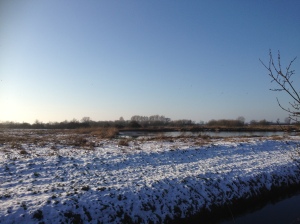 The Reedbed pool held a couple of hundred Black Headed Gull, and 300 Teal erupted from the flooded fields as I approached, surprisingly few Wigeon tho with only 20 counted in flight.

Water Rails were evident between the scrape and right up to the concrete road, with an estimated 15 birds seen/heard. The reedbed was alive with Wren and Dunnock, this area must be a real life saver for these vulnerable little creatures.

A flock of obliging finches were feeding on set aside but didn’t hold any Twite unfortunately, I watched as a Weasel came running towards me with a shrew in its grasp , it came within 6 feet of me, I hadn’t realized I was stood so close to its underground lair !

The last birds of the afternoon were a Single Grey Wagtail and a couple of Reed Buntings feeding alongside the concrete drain, with 2 Water rail squealing right beside my car in the willows at the concrete road.

A great afternoon in stunning sunshine.