My wife and I attended a family wedding on the Wirral peninsula at the end of last week and this gave Karen and I the chance to got to spend the night in north Wales in our motorhome over the weekend for the first time.

The wedding was in North Heswell and the location for the ‘do’ was right on the Dee Estuary and this gave spectacular views not only for the wedding party but also myself who was able to do a little long distance bird watching, the closest birds seen with the naked eye were hundreds of Oystercatchers feeding / resting on the mud banks with many other flying birds being seen from afar – too far to ID them sadly. Redshanks were in the area though as I heard their distinct call on more than one occasion. As the sun faded both Starlings and some remaining Swallows used the various sized moored boats mast lines as perches.

What a setting for a wedding though.

Prestatyn
We chose Prestatyn as the base and got there mid afternoon on Saturday so once sorted out on the campsite we headed off for a walk. The seafront was the first target and then onto a walk into town and possibly a pint or two to follow!

There were not that many birds about at the time we were on the seafront, the usual Herring Gulls were prevalent with many young birds being seen following their parents about begging for food.

The odd Black Headed Gull appeared here too with only the odd one or two feeding on the beach in and around the small pools left as the tide moved out.

At sea only the odd small group of low flying, piping Oystercatchers were seen either flying in the direction of Rhyl or landing to feed for a few moments at the waters edge before flying off again to join their fellow birds on another part of the coast.

We began our walk back into town in search of a decent pint and came across a group of noisy House Sparrows in cultivated area of low shrubs just back from the promenade and I managed a few decent images of this often overlooked bird. 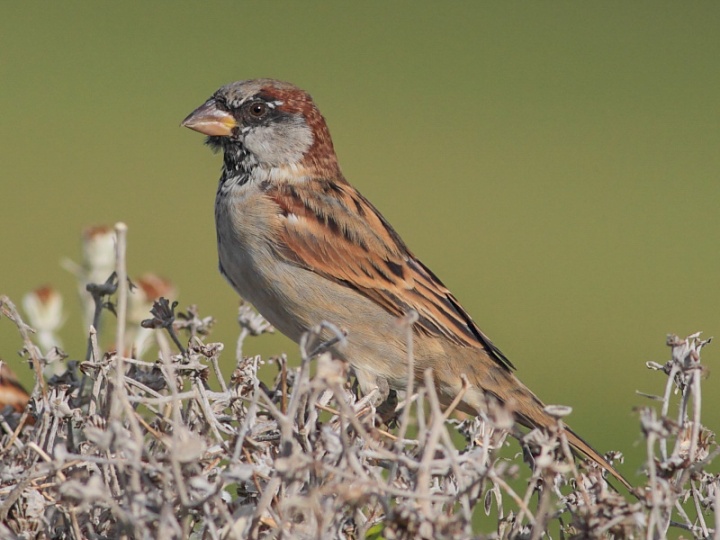 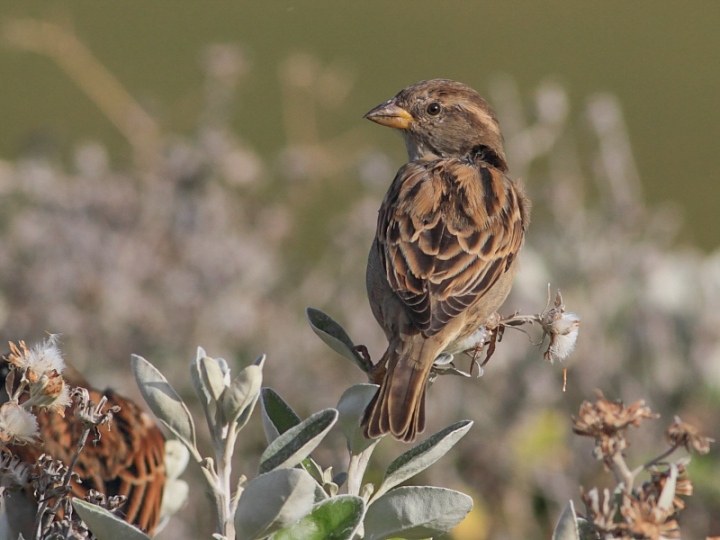 Rhyl
On sunday we moved onto Rhyl for a couple of hours before heading on the long drive home.

There were a few more birds around here with a distant sand bank golding around 50 Oystercatchers mixed in with Herring, Black Headed and either Lesser or Great Black Backed Gulls, there were also a surprising number of active Cormorants about with at least 12 being seen both on the sand bank and in the air. Did not get close these birds on the sandbank as it would have taken a while to get to this part of the coast and we were limited on time in Rhyl due tot he long drive back home.

An added bonus was the sight of about 10 Sandwich Terns that were nestled together on a sand bank as well with the odd bird or two flying along the coast to fish, make their wonderful call so all knew they were there and also to annoy any fellow Terns by trying to push them off from their ‘yellow buoy’ perches that were spaced out on the sea a little way out.

The Herring Gulls occasionally gathered when one of their kind had found some food and they then attempted to battle for the food in the air to get the goodies, the light was not brilliant but got this image of a juvenile heading to join in with the arial food fight.

Again we saw a few House Sparrows on the promenade heading back to our motorhome they were in and around the nicely kept War Memorial area on this road, there must have been 50 Spadges at least so this was nice to see.

I will have to call back to this part of Wales sometime when note time is available to explore a little more.