I wasn’t really out birding today, we met up with some old friends from Nottingham for a walk. Arranging to meet half way, we did a six miler in the Caythorpe/Hoveringham area. There was no way I was walking without my bins round my neck and along the Trent there were a pair of goosanders, several goldeneyes, great crested grebes and other commoner ducks. The last part of the walk took us alongside Hoveringham pits and it was there that a quick scan revealed a large gull that shone like a beacon in the sun. It was the only large gull there, amongst some black-headed gulls. I couldn’t believe my luck, it was a white-winger. It was a long, long way off even with bins. Luckily my small hand camera was in my pocket, I wanged it up to maximum magnification and managed some sort of a shot or two. I was still unsure of the I D but looking at the longish wing projection and overall structure I reckon it is an Iceland gull, (probably late 1st winter), rather than Glaucous. No doubt someone will put me right if I’m wrong. No apologies for poor pics, glad I got any at all, my battery went after a few clicks. Now I had to run to catch up with my non-birding friends. Next stop, pub. 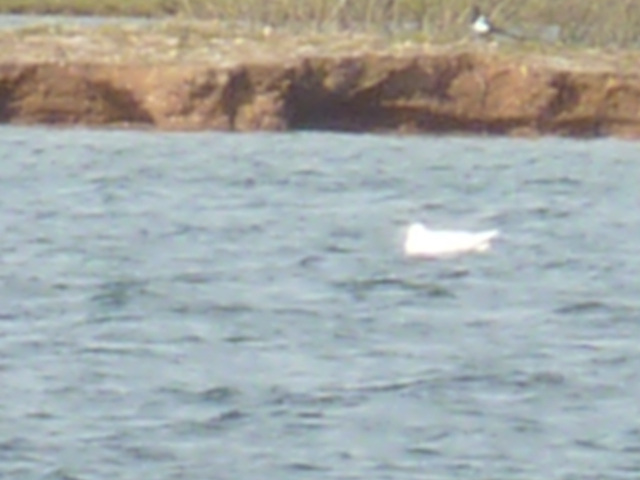