Got round to a sailing trip on my brother’s boat,setting sail from Gib,early Fri.26th.We slept on the boat Thurs. night,moored in the Steeping river.Hardly slept a wink.At 4.20 am a couple of greenshanks called and then fed in the mud right outside my window,just feet away,in the half light.I could have sworn one had a little notebook tucked under it’s wing,probably making a list of all the boat names it saw.Several common sandpipers flew up and down river.

We left on the high tide with another three boats in our flotilla.Pete negotiated the river across the flooded saltmarsh while I enjoyed the swarms of knots,dunlins and sanderlings whirling around us.I was hoping for a few seabirds on the trip but it was a bit disappointing as the winds were fairly light south westerlies.Several flocks of common scoter,a few gannets,sandwich terns and ‘comic’ terns were noted as we sailed towards Donna nook.A couple of the terns were definitely arctics.Two whimbrel went south and a common guillemot sat on the sea. 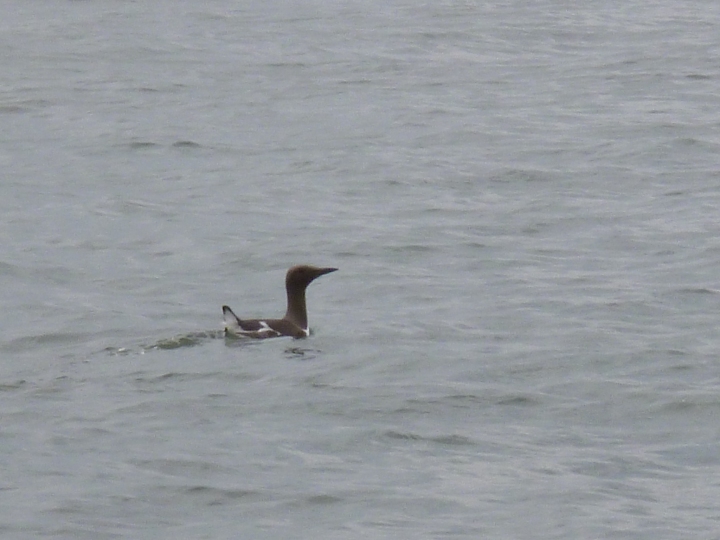 This sailing mularky was quite enjoyable,not exactly hard work, my crew duties only stretched as far as manning the tiller and making tea.The boat was well stocked with cans of beer.The gremlins were never far away,there’s always some gadget or other not working right.Fun,though.

There were a few more birds around as we arrived at the Humber approaches,a couple of arctic skuas were my first this year.Seals popped now and again.

We picked up the incoming tide once we were in the Humber and our speed increased to about seven knots.I really enjoyed the next stretch as there was plenty to see.We dodged a few ferryboats and ocean going ships and managed to avoid running aground on the sandbanks. 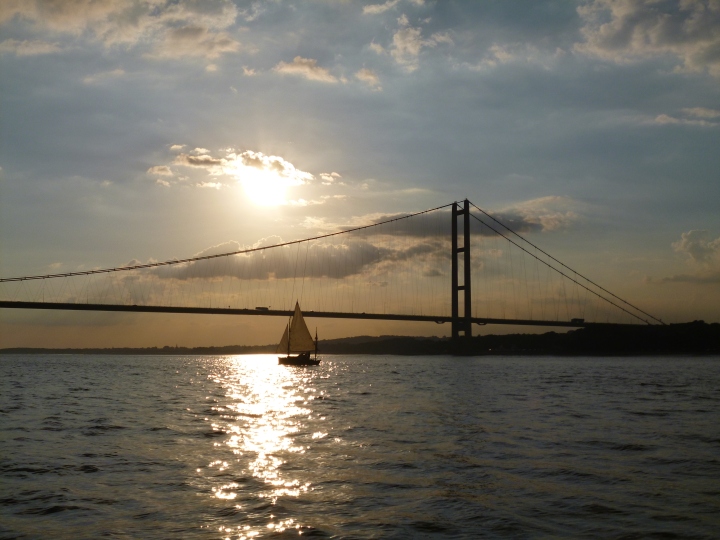 Just past the bridge I spied a swan on the shoreline that looked to be moulting,it was a whooper,an unusual bird for the time of year.See the white blob,below.

As we got near Read’s island birds were everywhere,scores of avocets fed on the mud and a marsh harrier floated low over the marshes.Waders,geese and ducks made for a beautiful end of a thirteen hour trip,as the sun began to sink.

The Winteringham boat club sent out a small craft to meet us and direct us up the creek,just a gap in the tall reeds.Gymno got stuck in the mud a couple of times,but the leval was rising fast-you can only arrive or depart from the haven at high water.It was now late evening and it didn’t take us long to zonk out after some grub and a couple of cannies.Slept better that night.

Saturday I was able to do a bit of birding,before the club’s annual shindig in the evening.The main feature here was the marsh harriers,with up to six over the reedbeds together,always great to see.

The ‘do’ was a bit good with pie,chips and peas and a twelve-piece band from the village.We all tried to keep clear heads for the big sail back in the morning but the wind was starting to blow…..

…….Sunday morning arrived and it soon became clear it was going to be a bit of a challenge.The forecast said force six to seven.The skippers decided to abandon the sail back.Boats were left at the Haven and alternative transport was arranged.All four boats will have to be recovered when the tides are high enough again.