Arrived home to find a text from David M on my personal mobile, Whooper Swans MSTW @ just before 9am this morning so after a little deliberation and a text sent off to Trev L to see if he knew they were still there or not off I went to see for myself.

I had only seen these birds once before so was pleased to see a large white blob of colour standing out nice and clearly in the turf field at the works end of the site. I began to take a few shots across the whole group to enable counting later – a brief count and a chat with 2 birders that drove down the works lane confirmed 28, nice!

I took a few shots, a selection of which are below …

After about 10 minutes after the 2 birders left I walked along Viking Way as the birds were heading towards this part of the field right of my current vantage point on the works track.

I got to a point where I could focus past the hedgerow and into the field, took a couple of shots and I think 2 low flying Crows spooked them into action and the took off, 1 shot of the run before take off below, the hedgerow stopped me taking more images of the lift off, if this had happened when in the other view point would have had a great opportunity to photograph the group as the looped over the turf field and then headed over Marston village heading north @ 4.05pm. 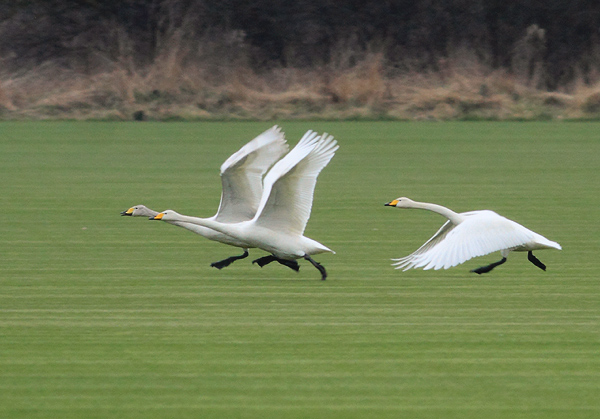